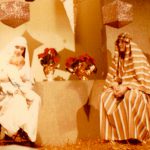 It had all be so personal for Mary – a visit from the angel, the sense that she was pregnant by the Holy Spirit. We don’t know if she told her parents or guardians, but she knew the physical sign of what has been happening to her would be in seeing her barren cousin, Elizabeth, with child. So in an era without text messaging, she did the next best thing and headed off to see her.

Can you imagine the moment when she saw Elizabeth pregnant?

Everything became real. It wasn’t just her imagination or a dream. The Holy Spirit did overshadow her. Elizabeth is proof of miracles.

What was spiritual, became physical.

Not only that, Elizabeth confirmed what Mary knew in her heart. Before words came out of Mary’s mouth, Elizabeth recognized what had happened deep within Mary. And Elizabeth’s baby responded as well, as it would be the call on his life to proclaim the coming of the Messiah.

Elizabeth affirmed Mary’s faith that there would be fulfillment of prophecy.

And at that moment, Mary’s tongue is loosed. What had been secret now is real! She knows it’s true, not just hallucination.

She knows she can’t take credit for any of it!

Mary doesn’t talk much in scripture, at least in what is recorded, but in this case she bursts into praise. She gives credit where it is due – on the Lord, God, her Savior. She is overcome with gratitude (I’m sure she needed to lean on later when tough times came) that God had chosen her to bear his Son. He would not only be the Savior of Israel, and of the world, but he would be her personal Savior.

Remember, she says all this no knowing how it will all work out. She says this not knowing if she will be a single mother, living in shame. She doesn’t know that her Savior will face the cross.

She only knows that there is life within her.

I can’t help but reflect on the moment I turned my life over to Christ. It was a private moment of complete surrender. It’s hard to describe it, but I knew the Holy Spirit was there, giving me new birth.

I was private about it for a while. But then people began to notice a change in me. I began to make different choices in my life. I began to believe that he who I had entrust a moment to be my Savior would also be faithful for the rest of my life.

What was spiritual, became physical.